First change to take note of is updated graphics. I noticed that the buttons looked kind of chunky when they were scaled up for the smaller puzzles, and I felt that just made the game look like raw crap. So I’ve redesigned all the buttons to use just two very large custom button images. I decided to draw the image much larger than they’ll ever need to be so that they will look nice and smooth at any size and resolution. Kind of makes the game a bit more High Definition. One thing that I really like about the new buttons is it’s much easier to tell the difference between a button that it turned on, and one that is turned off. 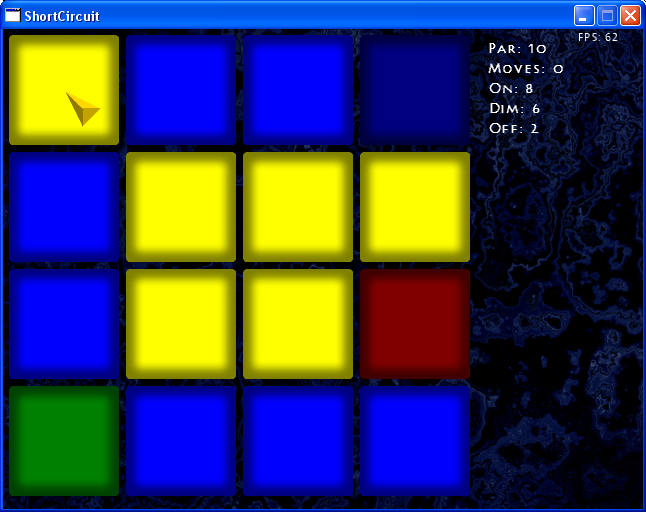 With that done, my next step is to port the game to the Xbox, which is exactly what I’ve started to do. Last night I ported the game over and started testing it on my Xbox 360. Almost immediately I hit a major stumbling block that caused me to grumble and cuss for a good long while before I finally figured it out. Shortly after loading the game on the Xbox console, the Frames per Second (FPS in the top right) dropped drastically all the way down to 2. Yes, that means my game was outputting a mere 2 frames per second. Anyone who’s been exposed to gaming more than a novice gamer would be able to tell you that FPS is a very important number when it comes to games and it should always be at or above 60 for the game to run smoothly. The sheer fact that my FPS dropped all the way down to 2 was staggering to say the least. I did manage to find the problem and get it fixed. Every few milliseconds the game calls an update method. In that update method I was checking to see if there was any music playing, and if not I would start the music. Based upon the game’s behavior I can only guess at what went wrong here, but here’s my guess: On the first call to update, the music is not playing so it starts the music. On the next few calls to update the music hasn’t had time to start playing yet so it sees it as the music not playing and tries to start it again. The end result is that by the time the music actually starts playing there are several copies of it that are playing all at the same time and the game couldn’t handle it. I fixed this by moving all the associated code out of the update method and into the LoadAssets method for each screen. I also added a call to end the music to the Unload method for each screen. This way every screen handles its own music and it only tries to play it once. After fixing the music, the game ran at its normal 62 FPS on every screen I tested. I found it kind of odd that the Xbox would have problems with this when the PC didn’t have any, but it is what it is. I did notice a few other things while testing last night that I intend to address tonight. First, for some reason the classic levels 4 and 7 were the exact same levels. Obviously that will have to be changed, and will be my first change tonight. Secondly there are a few levels that I can’t remember how to beat. I know they can be beaten, I just don’t remember how. I find that to be a problem because if I can’t figure out how to beat them, how do I expect any players to do it? I’ve decided to go through every puzzle and write down the steps it takes to beat them, and replace any puzzles I can’t figure out with new ones. I figure that writing down the steps to beat each level may come in handy later, especially after I add the last two game play modes. Finally, the last thing I noticed that needs fixing is that after you beat each level, it asks you what hard drive to use. Obviously, the game should only ask you this once, and that’s when the game first starts up. I plan on fixing this tonight. As for the last two game play modes, I’m kind of thinking of holding them back for a second version. I figure that with the two game play modes that I’ve included the game can sell on Xbox for about 80 Microsoft Points, which is equivalent to roughly $1 U.S. Dollar. The pricing has taken some careful consideration as like most people I want to earn as much as possible for my creation. Selfish desires aside however, I realize that many gamers don’t have a whole lot of money to spend on downloadable games, so the 80 MSP price tag makes my game a bit more attractive to them. Besides, at $1 per game, I’d earn about $0.50 per game that sold. If a million people buy my game, I’d stand to earn half a million dollars. That’s way more than enough to take care of my family and sponsor my next game, which I’ve already gotten fairly well planned out. I’d imagine that with half a million dollars I could easily have my next game professionally produced by a company like 4J Studios or Bethesda.